The year 2018 starts with two real gems in the house of Fire and Flames Music: On the 26th of January comes the long awaited new album of Moscow Death Brigade and in February follows the split release of What We Feel and Mister X. 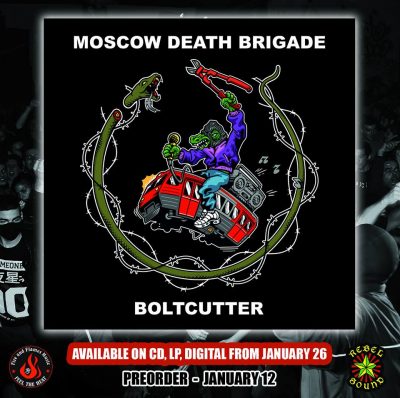 Moscow Death Brigade are finally catching on: In 2014, “Hoods Up” was the first ever record released by the crew from Moscow, and MDB has made numerous tours and concerts over the last three years with their unmistakable mix of punk, hardcore, hip-hop and Metal in Europe and became the world’s most famous figurehead of the Russian scene. With “Boltcutter” comes the first regular album, on which the band expands its already known style mix with elements from drum’n’bass, dancehall and techno. The result is a genre and scene-spanning musical statement that speaks out against injustice, hatred, stupidity and ignorance and has the goal to get the various subcultures at one table (or club).

The new album will be released as LP, CD and Digital on Fire and Flames Music and Rebel Sound Records. Moscow Death Brigade is on tour in Germany, Poland and Switzerland in February, including support shows for Feine Sahne Fischfilet and two double-release gigs featuring What We Feel and Mister X on 23.2. in SO36 Berlin (+ Stage Bottles) and on 24.2. in the Alte Meierei Kiel. 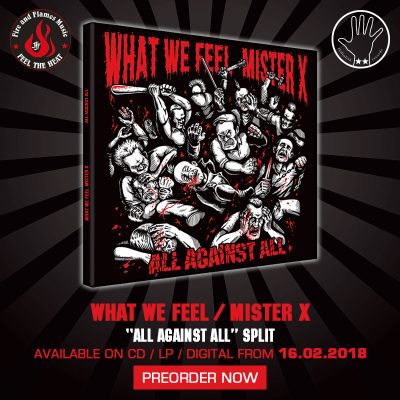 After a longer break, What We Feel are finally starting with new material: Together with the Belarusian Oi! / Streetpunks Mister X, they are presenting an angry split-release featuring four new songs from both bands, including cover versions and an interpretation of Feine Sahne Fischfilet’s “Komplett im Arsch“.

What We Feel, founded in 2005, has come a long way in the meantime: The initial cellar and pub gigs have meanwhile become major concerts and festival appearances. Nevertheless, they continue to do what they do best: straightforward hardcore without being cliched. Their themes are friendship, solidarity and the struggle for one’s own beliefs. For them, the deed usually counts for more than the word and the guidelines are the principles of hardcore and punk.

But What We Feel can not be limited on music alone, their messages are spread in films such as “Ivan. In memory of our friend “(Russia) or “Noise and Resistance “(Germany), which are often shown on their tours and used as a basis for information and discussion events. Since the beginning, the band has regularly supported various charitable initiatives and projects through benefit concerts and public relations on their tours.

Mister X founded in 2003 in Grodno, West Belarus. The band is part of the small but active anti-racist S.H.A.R.P. Scene in Belarus. The band is confronting ignorance and prejudice and does not tolerate racist, sexist, fascist, nationalist or homophobic behaviors at their concerts.

The band is traded beyond the borders of the former Soviet Republic as the flagship of the Streetpunk from Belarus.

The texts of Mister X are subculturally influenced, their commitment to anarchist projects and the squatter scene throughout Europe testifies a consistent rejection of state repressive mechanisms. Despite the dangers to life and limb of anti-fascists in the former Soviet states, the band stands by their convictions and fights the fight on all levels – because it is necessary and correct.

The split album of What We Feel and Mister X “All Against All” will be released in February 2018 as a collaboration between Audiolith and Fire and Flames.