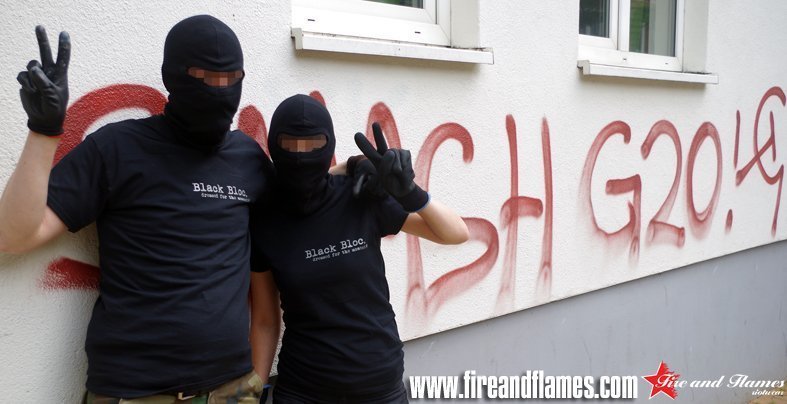 NO JUSTICE NO PEACE … YES – WE GAVE THEM HELL!

An eventful week lies behind us and the whole nation, whether they’ve been in Hamburg or just on their displays, spreads its adventurous ideas about what was going on during the days of action against the G20 summit. So it’s time for us to dissociate ourselves explicitly from a violent capitalist system, which murders, exploits, destroys and oppresses people all over the world every day, from its leading administrators celebrating themselves behind razor wires and from marauding violent police armies occupiing a whole city for weeks.

Differently the mainstream public opinion we have not forgotten yet how the last week really began: That hundreds of uniformed thugs stormed our legal camps, have beaten up comrades and robbed their tents several times. That the police state just shoved around anti-G20 acivists for days. That they massacred our anticapitalist demonstraion on thursday and injured hundreds of comrades within minutes. That they’ve send armed special police forces against riot kids and residents. So we definitively will not dissociate ourselves from those who succesfully fought back the pigs on friday and liberated the Schanzenviertel from the permanent hazard to become a victim of police violence for hours by building barricades and pushing back the cops with the required tools. Needless to say that we probably don’t agree with every single action of that night but it’s obvious that it turned the tide and it was necessary to defeat the ultra-brutal police strategy against the whole noG20 resistance. An angry mob remains an angry mob and is not a coordinated militant action, but it’s for sure legitimate and especially in this situation even necessary. The riot happened neither on the wrong place nor at the wrong time: It happened on friday during the half time of the summit just a stone’s throw away from the exhibition halls. And we still believe that dark clouds of smoke are the right ambience for the political leaders of the warzone capitalism.

However, we shouldn’t leave the historiography of the Hamburg insurrection to our enemies. We should stay as self confident as we confronted the heavy repression of the last days again and again. Our resistance has been a great success: We’ve been tens of thousands from all over every single day. We took back the streets after every attack on our demonstrations even more determined. We felt the solidarity of so many people in the quarter who opened their houses, gardens, parks, halls and stands and gave us places to sleep, food, information and help. We stood together and made sure that it will last at least 15 more years until the leaders have forgotten again, that they better meet up with their ugly allies far away on an island or nowhere and not in a European metropolis. Don’t believe their lies: It’s their desaster not ours!

Thanks to all the great comrades from near and far who altogether made it possible and took care of each other. All those who organised small or big actions. To the great cooks, the legal team and the medics for their so important jobs. Good luck and all power to the countless injured comrades and those who are still imprisoned.

We gave them the hell they deserve! No excuses to the police, the state and the howling authoritarian characters!

Don’t let the system get you down – take care, keep on and fight capitalism!
United colours of resistance – Venceremos!